High-level Intergovernmental Meeting to Conclude the Asian and Pacific Decade of Disabled Persons, 1993-2002 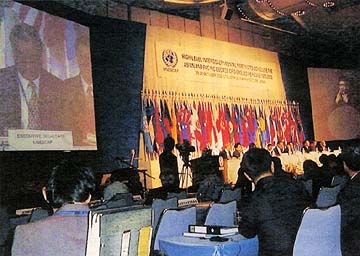 The High-level Intergovernmental Meeting to Conclude the Asian and Pacific Decade of Disabled Persons, 1993-2002 was held for 4 days, from October 25 to 28 in Otsu City, Shiga Prefecture, Japan. The meeting was attended by government representatives of 24 UN member states in the Asian and Pacific Region, including Afghanistan, Australia, Japan, and 2 associate member states, the Cook Islands and Hong Kong, China. Also present at the meeting were representatives from such UN bodies and specialized agencies as the United Nations Children’s Fund (UNICEF), the UN Office for the High Commissioner for Human Rights (UNHCHR), the Food and Agriculture Organization (FAO), and the International Labour Organization (ILO), as well as representatives from international NGOs such as the World Federation of the Deaf (WFD), World Blind Union (WBU), Disabled Peoples’ International (DPI), Rehabilitation International (RI), and Inclusion International (II). WFD was represented by Board Member Mr. Eiichi Takada, Director Takeo Ogura of WFD Regional Secretariat in Asia/Pacific (RSA/P), and Dr. Yutaka Osugi of the Japanese Federation of the Deaf. Trainees from different parts of the A/P region who are studying in Japan under the Japan International Cooperation Agency (JICA)’s “Leadership Training of Asian and Oceanian Deaf Persons” also attended the meeting as observers.

The meeting opened with a welcome statement by Mr. Kim Hak-Su, Under-Secretary-General of the United Nations and Executive Secretary of ESCAP, and by Mr. Yoshitsugu Kunimatsu, Governor of Shiga Prefecture. An inaugural address of the Prime Minister of Japan (delivered by a Cabinet Official) was followed by a statement by Mr. Eita Yashiro, Chairperson of the Organizing Committee for the International Forum on Disabilities to Mark the End Year of the Asian and Pacific Decade of Disabled Persons.

The highlight of the meeting was on the third day, when the participants considered the contents of the “Draft Biwako Millennium Framework for Action Towards an Inclusive, Barrier-free and Rights-based Society for Persons with Disabilities in the Asian and Pacific Region” (to be called “Biwako Millennium Framework”). This set forth a plan to guide policies and actions to be taken during the new “Asian and Pacific Decade of Disabled Persons”.

“Sign Language” and “Communication” Issues Overlooked in the Proposed Framework

Important Additions to the Original Draft

When the WFD delegates read the Japanese translation of the Biwako Millennium Framework, which was handed out at the meeting, they were shocked to find that in Section IV, item F: “Access to information and communications, including information, communication and assistive technologies”, there was nothing written about Sign Language or Sign Language interpretation, except for a slight mention in the footnotes. The delegates held an urgent meeting to draw up an amended text. On the second day of the meeting, WFD RSA/P Director Ogura spoke from the floor in Sign Language to propose the amendments to the draft text. 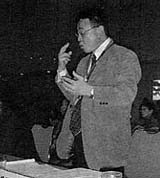 (above) Proposing amendments to the draft text:
Director Takeo Ogura of WFD RSA/P explains the
need to amend the draft text of the Biwako Framework.
(Photo taken by Mr. Hisataka Tsuji of Shiga Prefecture)

On the third day, however, a member of the ESCAP Secretariat informed WFD delegates that only government representatives had the right to propose amendments to the draft, so that WFD would have to persuade government representatives to propose the amendments to the draft. Mr. Takada and Dr. Osugi took this advice and lobbied with government officials from Japan, Thailand, Vietnam, Cambodia, etc. and requested for their understanding and cooperation. WFD’s proposal was also supported by the group of disability NGOs called the “Disability Caucus”. As a result, the representative from Fiji spoke first, then from Samoa, followed by Japan, Thailand, Cambodia, and Vietnam to propose additions to the draft text exactly as proposed by the WFD delegates. These amendments were approved by the floor and the chairperson. The amended text which was handed out on the last day of the meeting is given below.

IV. Targets and Action in the Priority Areas

43. In many countries in Asia and the Pacific, sign language, Braille, finger Braille (tactile sign language) have not yet been standardized. These and other forms of communication need to be developed and disseminated. Without access to such forms of communication, persons with visual and/or hearing impairments cannot benefit from ICT developments. More importantly, they may be deprived of the basic human right to language and communication in their everyday lives.

Target 19: Governments should develop and coordinate a standardized sign language, finger Braille (tactile sign language), in each country and to disseminate and teach the results through all means, i.e., publications, CD-ROMs, etc.

Target 20: Governments should establish a system in each country to train and dispatch sign language interpreters, Braille transcribers, finger Braille interpreters, and human readers and to have them employed.

The Chairperson of the International Disability Alliance (IDA), Ms. Kicki Nordstrom (from Sweden, President of the World Blind Union), attended the UN ESCAP High-level Intergovernmental Meeting. At the initiative of Ms. Nordstrom, disability NGOs participating in the Intergovernmental Meeting formed a “Disability Caucus” and met every morning before the Meeting. Through this initiative, the following addition was made to the proposed Biwako Millennium Framework:

V. Strategies to achieve the targets of the Biwako Millennium Framework for Action

B. Promotion of a rights-based approach to disability issues

Strategy 7: Governments should include persons with disabilities and their organizations, in their procedures at the national, regional and international levels, concerning the drafting and adoption of the proposed human rights convention on disability, (as decided by General Assembly resolution 56/168 of 19 December 2001) which by passing, will ensure a strong consumer-influenced monitoring mechanism on the rights and responsibilities of persons with disabilities.

This entry was posted in Japanese Deaf News. Bookmark the permalink.