Posted on November 15, 2002 in meetings and events, Japanese Deaf News 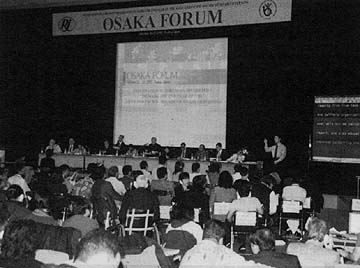 Following the 6th World Assembly of DPI, the Osaka Forum was held for 3 days from October 21 to 23. The Osaka Forum was one of the main events to mark the end year of the “Asian and Pacific Decade of Disabled Persons, 1993~2002”. The Osaka Forum meetings were held in 3 venues: the Osaka International Convention Center, the Osaka City Maishima Sports Center for Persons with Disabilities (Amity Maishima), and the International Communication Center for Persons with Disabilities (BiG-i) in Sakai-shi.

Under the main theme, “Partnerships for Disability Rights”, 4 large conferences were held as part of the Osaka Forum: the 12th Rehabilitation International (RI) Asia and the Pacific Regional Conference, the Campaign 2002 to Promote the Asian and Pacific Decade of Disabled Persons (RNN), the 25th National Rehabilitation Conference, the International Research Meeting on Vocational Rehabilitation. The Osaka Forum was attended by about 2,400 people from 55 countries, including persons with disabilities, rehabilitation specialists, and others. The participants evaluated the experiences and achievements accumulated by the countries of the region during the Decade, and discussed the issues which still remain to be solved. The polices for the second A/P Decade were also discussed, as well as the regional involvement for the realization of the Convention on the Rights of Persons with Disabilities.

The participants of the Forum also adopted the “Osaka Declaration on Partnerships for Disability Rights” and decided to propose this declaration at the UN ESCAP High-level Intergovernmental Meeting to be held from Oct. 25 in Otsu City, Shiga Prefecture.

At the plenary session on Oct. 21st and 23rd, there were 3 keynote speeches and 3 panel discussions. These highlighted the achievements and progress made during the Decade, while at the same time, focusing on areas that need special attention such as poverty, women with disabilities, and procurement of funds. The Forum speakers also stressed the importance of working with the governments, the need for organizations of persons with disabilities to take action, and the need for collaboration and cooperation among these organizations of persons with disabilities.

President Liisa Kauppinen of the World Federation of the Deaf, who was one of the designated speakers of the Osaka Forum, Mr. Eiichi Takada, board member of WFD, and Mr. Takeo Ogura, director of WFD RSA/P gave their opinions from the standpoint of the Deaf.

Pres. Kauppinen expressed the fear that section on “prevention of disabilities” in the proposed draft for the convention may lead to the exclusion of the very existence of persons with disabilities through abortion, etc., and stressed the need to distinguish between that kind of exclusion and the real need to “prevent disabilities arising as a result of wars and other such environments”. Her opinion was unanimously supported by the floor.

Mr. Takada expressed the need to address disability issues as a matter of concern for the entire population. He stressed the importance of conducting movements to raise the awareness of the public at large. Mr. Ogura explained that the Deaf must be guaranteed access to information. Concerning the new Asia Pacific Development Center on Disability, Mr. Ogura stated that he supports the establishment of the Center, on condition that information is provided equally to Deaf persons in countries where there is no nationwide organization of the Deaf.

From RNN to APDF

In the morning of Oct. 22, the board members of the Japanese Federation of the Deaf attended 4 workshops of the 25th National Rehabilitation Conference. At the workshop on “Disqualifying Clauses”, a member of the Association of Medical Professionals with Hearing Disabilities reported that the group is now compiling the results of a survey on medical professionals with hearing disabilities, and is planning to publish a book of case studies. JFD looks forward to this book as a useful tool in explaining the needs of persons with hearing disabilities to the government.

In the afternoon, at the “Group Discussion with Persons with Hearing Impairments”, Pres. Hiroshi Kiyota of the Osaka Association of the Deaf, and Ms. Shizue Hirota, who is working as a helper for the aged, brought videos and gave presentations to show the situation of aged persons and the support that is being provided, and the movement to build a nursing home for aged Deaf persons. The presentations by Mr. Kiyota and Ms. Hirota were followed by numerous questions and opinions from the Deaf participants from different parts of the A/P region. This Group Discussion with Persons with Hearing Impairments was attended by 101 persons, which was the largest attendance among all the groups.

At the closing ceremony, the “Osaka Declaration on Partnerships for Disability Rights” was adopted. It was also reported that a new alliance called “Asia Pacific Disability Forum” will replace RNN, and that Singapore is the site proposed for the first campaign to be held next year.

This entry was posted in meetings and events, Japanese Deaf News. Bookmark the permalink.