Achievements of the Deaf Movement

Until 1979, deaf people were legally regarded as quasi-incompetent persons (people who were pronounced as incompetent by the family court, due to the mental and/or physical diminished capacity and wasteful habit. They were required to obtain the consent from curator when they perform important legal acts related to property), thus they were not able to apply for housing loan and succeed the family business. As a result of the sustained campaign by the JFD, the Civil Code was amended in 1979.

Message from a deaf person who was able to apply for the housing loan:

Using the loan from the bank, I was finally able to build the house of my own. I am very happy to live my life just as the hearing people do.

Photos – Left: Deaf people established the Japanese Federation of the Deaf, at the assembly at the Ikaho Hot Spring, Gunma. May 25, 1947. Right: Eiichi Takada, former Chief Secretary of the JFD, addressed about the discriminatory disadvantages by the Civil Code Article 11 at the Diet. This first-ever presentation by the Deaf at the National Assembly made a strong impact to lead to the amendment of the law.

New Current of the Deaf Movement: Establishment of the Youth Section

The first discussion forum for the deaf youth was held in Kyoto in November 25 to 26, 1966. The young deaf participants, who even did not know the word, “sabetsu (discrimination),” learned about the issues violating the rights of the deaf people, as well as addressed their bitter experiences that their wishes and dreams were stumbled by the unreasonable obstacles. In order to pursue the reasons and to act toward, they went on to the launch of the JFD Youth Section. As a turning point of a series of deaf activism, from “asking for mercy” to “claiming for right,” this milestone discussion forum raised many deaf youth activists. 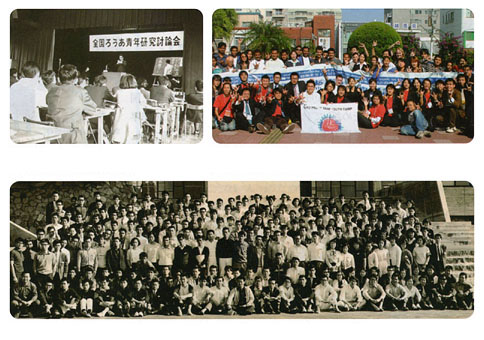 International Communication to Expand the Field of the Deaf People

More and more deaf people are participating into the international events, such as the quadrennial World Federation of the Deaf Congress and the Deaflympic Games (international sports competition for the Deaf). Our affiliated regional Deaf associations started active exchanges and communication with the deaf people living in Asia. Asian Deaf Friendship Fund (currently named the “Asian Deaf Friendship Aid Project”), launched as the JFD 50th anniversary project, has been expanded by continued supporters. The mutual communication with the deaf people overseas expands the field of the deaf people in Japan.

Message from a board member of a Deaf association:

I have been to the United States for a year, and this study experience taught me that organizational activities and projects are quite important. Now I wish to get involved into the JFD to make a commitment to the policy making by the deaf people. 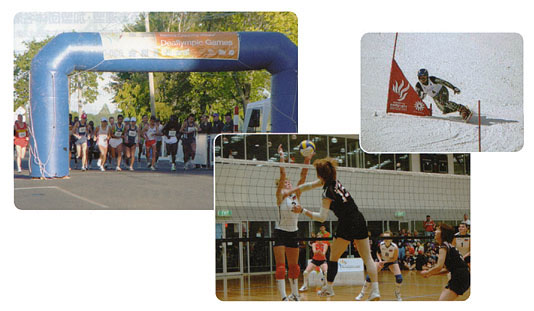 Photos – Top left: “Deaflympic Games” is the Olympic Games of the deaf people, held every four year both in summer and winter in turn. Top right: Snowboard athlete winning the gold medal

The Japanese Federation of the Deaf, with a value on sign language interpreting as a means of communication, had been leading the nationwide movement for the establishment of “Sign Language Interpreting System”. As a result, the Sign Language Certification Examination accredited by Minister of Health and Welfare was conducted in 1989. 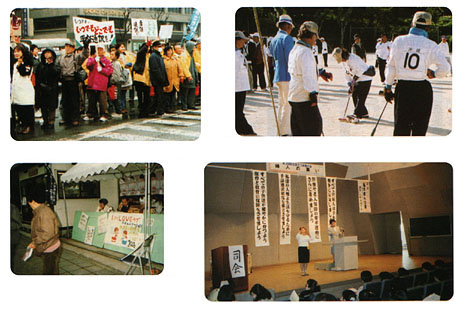 Photos Top left: Marching for the establishment of Sign language Interpreting System. Top right: Nationwide social networking of the Deaf elderly through gate ball. Bottom left: JFD and National Research Association for Sign Language Interpretation made a tandem campaign of an awareness booklet, I Love Communication. A million and thirty thousand copies were distributed, reaching one percent of the entire population of Japan. Bottom right: The meetings to improve the environment for the deaf women got full of energy!

The United Nations Convention on the Rights of Persons with Disabilities (CRPD) which defines “Sign Language is a language” was adopted unanimously at the UN General Assembly on December 13th, 2006. It is significant that the “sign language” we use every day was recognized as a language in the same way as spoken Japanese.

Message from a Board member of JFD who lobbied at United Nations: 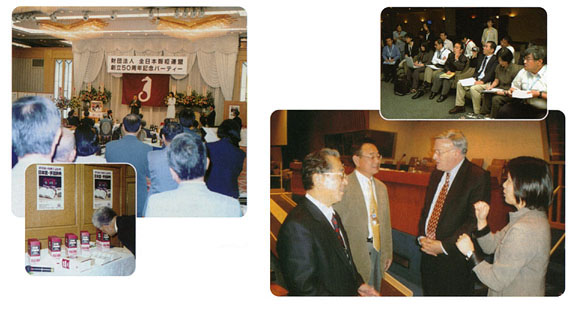 Photos – Top left: The 50th Anniversary ceremony of the JFD – many people gathered to the party to celebrate. Top right: Participants confirming the action procedure before start of the meeting. Bottom left: An accomplishment of nine long years, the Japanese-Japanese Sign Language Dictionary was completed!! Bottom right: JFD delegates lobbying in the Ad Hoc Committee of the United Nations to promote and include the rights of the Deaf into the CRPD.

In order to protect the rights of the Deaf, it is crucial to widely spread the awareness of the Deaf and sign language and increase the number of sign language learners. From the late 1960’s, deaf organizations have been supporting the establishment and development of sign language study groups. Sign language classes started to be offered by the government and those who completed the classes are working as sign language interpreters in their local areas. 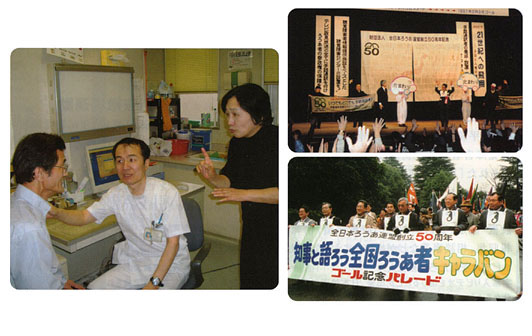 Message from a deaf driver:

My long-cherished dream was realized. I am very glad as it gives me more job options. 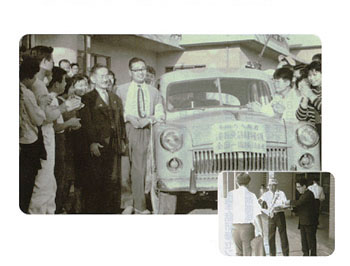 Photo – A nationwide petition campaign was launched to prove deaf persons’ capability of driving in 1958.

Before 1970’s, the job opportunity for deaf persons was limited only to sewing, carpentry and printing industry etc. Deaf persons had to work at lower pay and with more unstable status than hearing coworkers. JFD’s request for the expansion of job categories for the Deaf moved the government to amend the Act for Promotion of Employment of the Physically Handicapped and deaf persons gained opportunities to work at big electronic companies and automobile factories as well as financial institutions including banks.

Message from a deaf person in his 40s who was hired by a big company:

I used to work at a small company and receive lower salary. I am grateful that I can work at a big company and enjoy stable life now. It is great that the company acknowledges my ability. 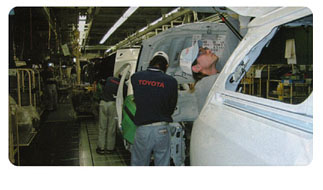 Photo – A deaf worker at an automobile factory

Information Center for the Deaf in various locations

Article 33 of Physically Disabled Persons Welfare (1990) stipulated establishment of “Information Centers for the Deaf and those for the Blind”. As of December 2006, the total number of 34 Information Centers for the Deaf was established throughout Japan. Production and Library service of videotapes with subtitles (sign language), Communication support service(Installation and dispatch service of sign language interpreters and notetakers, lending service of information devices, information collection as well as consulting service are available at those centers.

Library service of videotapes with subtitles has enriched my life as it enables me to understand stories of Japanese movies and TV programs. 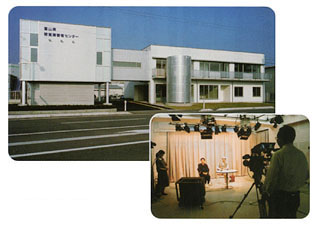 Photos – Top: Information centers for the Deaf were established one after another. Bottom: A film studio

JFD urged local governments to resolve that they would request to the Japanese government for amendment of discriminatory laws against deaf persons in 1998. As a result, the discriminatory laws against deaf persons were amended in 2001 and the absolute disqualifying clauses for the Deaf were eliminated. A deaf pharmacist was given her pharmacist license by the Minister of Health, Labour and Welfare himself.

Message from a deaf pharmacist:

Even though I had passed the License Examination for pharmacist, I could not receive the license because of my deafness. When I received the official license, I finally became free from my disability. I extend my gratitude to JFD and local associations for their support. I will continue to do my best for the better future hand in hand with them. 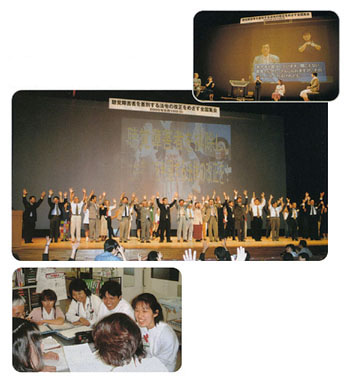 Photos – Top: National assembly to appeal for the abolishment of discriminatory laws against deaf persons. Bottom: To become a doctor is not a fantasy for deaf persons anymore! A deaf doctor is chatting with her colleagues.