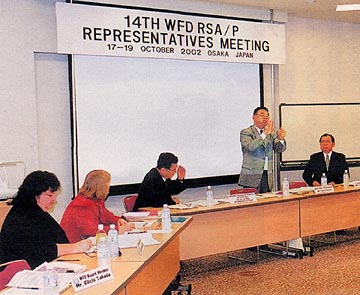 The 14th WFD RSA/P Representatives Meeting, held on Oct. 17, was chaired by RSA/P Director Takeo Ogura. The Meeting opened with a welcome address by President Toyoki Ando of the Japanese Federation of the Deaf (JFD), presented in International Sign.

Introductions of the special guests attending the Meeting, including WFD President Liisa Kauppinen and WFD Board Members, were followed by introductions of representatives from member countries. Guests from three non-member countries, Vietnam, Cambodia, and Fiji, were invited to observe this year’s RSA/P Meeting. These guests were also introduced.

Dr. Yutaka Osugi, representing the Japanese Federation of the Deaf, explained the scheduled program. This explanation was followed by commemorative keynote speeches.

After lunch break, WFD General Secretary Carol-lee Aquiline made a speech entitled “WFD Activity Report for 2001-2002”. With her jokes and sense of humor, she gave a very interesting and informative report on the broad range of activities undertaken by WFD.

Representatives from different countries reported on the achievements of the “Asian and Pacific Decade of Disabled Persons” from the standpoint of the Deaf, and discussed problems and issues which need to be addressed in future.

The first day of the Meeting was adjourned at 5:30 p.m., followed by the WFD RSA/P Management Committee Meeting at night, where activities and policies for 2002-2003 were discussed.

The second day of the Meeting opened with a presentation by former WFD President, Dr. Yerker Andersson, on ICF (International Classification of Functioning, Disability, and Health). Dr. Andersson used the projector effectively to make his presentation easy to follow.

Heated Debates at the Workshops! 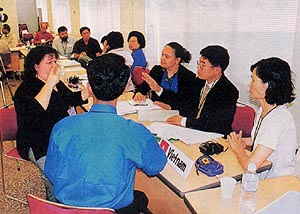 Group discussions during the Workshop

After Dr. Andersson’s presentation, the participants divided up into 4 groups for workshops coordinated by President Kauppinen and Ms. Aquiline. The theme of the workshops was “Lobbying for the UN Convention on Disability Rights”. After returning to the plenary meeting, representatives from each of the 4 groups gave a brief summary of the discussions.

In the afternoon, a substantial length of time was taken for country reports. Each country gave a detailed report on the situation of the Deaf and activities being undertaken. The guests from Vietnam, Cambodia, and Fiji expressed their firm resolution to establish a nationwide association of the Deaf.

On the third and last day of the Meeting, the remaining issues on the agenda were discussed and approved. These were: “Endorsement of the Osaka Statement”, “Proposals from Member Countries”, “Policy on Activities for 2002-2003”, and “Budget for 2002-2003”.

After all the issues on the agenda were approved, a ceremony was held to present an Award of Recognition to former WFD RSA/P Director Eiichi Takada for his many years of services and dedication to the advancement of the welfare of the Deaf in the Asia/Pacific Region.

The Meeting adjourned in the morning, after completing all the programs scheduled on the agenda.