Posted on February 15, 2007 in sports and Deaflympics, Japanese Deaf News 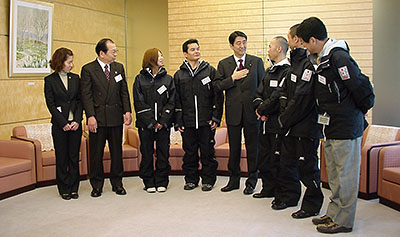 The 16th Winter Deaflympics was held in Salt Lake City, Utah, U.S.A. from February 1 to 10, 2007, hosted by the International Committee of Sports for the Deaf (ICSD). A total of 314 athletes from 24 countries competed in Alpine Skiing, Snowboarding, Cross Country Skiing, Ice Hockey, and Curling.

Japan sent a delegation of 39 people, including coaches, staff, etc. The 17 athletes from Japan competed in 11 different categories of 3 competitions: Alpine Skiing, Snowboarding, and Cross Country Skiing. The athletes have been practicing hard for the Deaflympics in special training camps.

On January 15, representatives of the Japanese Delegation to the Deaflympics visited the residence of the Prince and Princess Akishinomiya. They received a warm welcome from the royal couple. Princess Kiko gave her message of encouragement in sign language.

This entry was posted in sports and Deaflympics, Japanese Deaf News. Bookmark the permalink.