Posted on March 1, 2006 in Convention on Persons with Disabilities, Japanese Deaf News 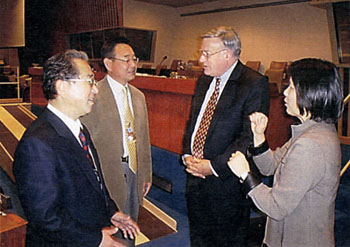 The 7th UN Ad Hoc Committee Meeting on the Ad Hoc Committee on a Comprehensive and Integral International Convention on the Protection and Promotion of the Rights and Dignity of Persons with Disabilities was held from January 16 to February 3 at the UN Headquarters in New York. From the Japanese Federation of the Deaf, Board Members Eiichi Takada and Takeo Ogura attended the Ad Hoc from January 20 to January 27, as part of the observer delegation of the Japan Disability Forum.

Present at the Ad Hoc were President Markku Jokinen and President Emerita Liisa Kauppinen of the World Federation of the Deaf (WFD), WFD board member Martha Lucia Osorno Posada of Colombia, and other Deaf representatives from Japan, Chile, Canada, etc. It was a pity that there wasn’t even one Deaf representative from the United States.

For the Deaf representatives from different countries, sign language interpreters were seated in a long row, facing their respective Deaf participants, and interpreted into 7 different sign languages. This was a very impressive situation and undoubtedly created a strong impact on everyone present.

Inside the Ad Hoc Conference Room

The UN Ad Hoc Committee Meeting on the Convention for Persons with Disabilities has been held 6 times in the past at a pace of about twice a year at the UN Headquarters in NY. In the Resolution adopted at the 6th Ad Hoc Meeting, it was decided that the Ad Hoc Meeting would be held twice during 2006, in January and in August, and that the delegates would aim to complete the drafting of the Convention text at these 2 meetings. The adopted Draft Convention would be submitted to the next UN General Assembly. The elaboration of the draft text has come to its final stages.

In October, 2005, the Chair of the Ad Hoc distributed a new “Chair’s Draft Text” based on all the discussions and agreements of the previous 6 Ad Hoc Meetings. Together with this Draft Text, the Ad Hoc Chair, Ambassador Don Mac Kay also distributed a “Letter from the Chair in which he states: “Please consider the Chair’s test on the basis of what you can accept, not what you would prefer….what you can live with, not what you love.”

The discussions of the 7th Ad Hoc were based on this new “Chair’s Draft”. Board Members of JFD, Mr. Takada and Mr. Ogura, attended the Ad Hoc in its second week, in order to be present for the discussions on Article 21 “Accessibility” and Article 24 “Education”. Both actively explained the importance of including the definition of sign language as a language, to oblige States to legally recognize the sign language of the country, to ensure the establishment of a system of training and providing sign language interpreters, and to guarantee access to education in sign language for Deaf children. 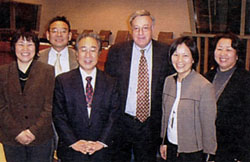 For the 7th Ad Hoc Meeting, WFD made clear its standpoint on Article 2 “Definitions”. It circulated a proposal on the definition of “Communication” and “Language”. These definitions are vitally important to the world Deaf community.

Concerning Article 24 on “Education”, the delegation from Canada proposed the inclusion of the following: “That persons with disabilities receive the support required, within the general education system, to facilitate their effective education. In those circumstances where the general education system cannot adequately meet] the individual support needs of persons with disabilities, States Parties shall ensure that effective individualized support measures are provided in environments which maximize academic and social development, consistent with the goal of full inclusion.”

The next UN Ad Hoc Committee Meeting on the Disability Convention is scheduled to take place from August 14 to 25, 2006.