Posted on July 1, 2005 in meetings and events, Japanese Deaf News

Learning from the Philippines 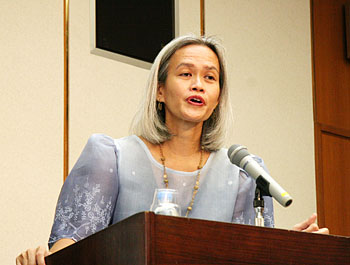 After greetings from the representative of the hosting organization [JISLS] and the President of the local Deaf Association, the honorary guest, Ms. Liza B. Martinez, Ph.D., Director of the Philippine Deaf Resource Center (hearing), gave her keynote presentation entitled, “Filipino Sign Language: Understanding the Past and Looking to the Future”. In this presentation, Dr. Martinez introduced the experiences of the Philippine Deaf community in Deaf research and advocacy.

Dr. Martinez’ lecture took us back to the 1590s when Spanish missionaries are thought to have brought Spanish Sign Language to the Philippines. She explained the beginnings of Filipino Sign Language and the different factors that influenced its development and expansion in 4 stages, from the 1st to the 4th “Waves of Influence”. She especially stressed the significance of the 4th Wave of Influence, characterized by advocacy to regain the rights of the Deaf and to promote the social recognition of Filipino Sign Language.

Dr. Martinez also introduced some recent achievements by the Deaf community in the Philippines, such as the publication of a set of books called “An Introduction to Filipino Sign Language”, the documentation of the research and compilation of signs from the different regions of the Philippines, and the adaptation of a National Plan of Action by the Philippine government in compliance with the “Biwako Millennium Framework for Action” of the 2nd “Asian and Pacific Decade of Disabled Persons. Furthermore, Dr. Martinez explained the problems and challenges that need to be solved in future. She concluded her speech with prospects for the future, in which she commented that “linguistic identity is the key to self-determination”. 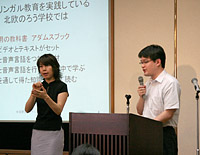 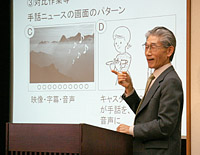 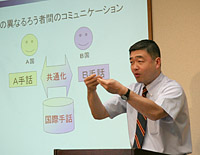 In the afternoon session of the “5th Japan Seminar on Sign Language Studies”, a researcher of the Deaf Education Studies Section of JISLS, Mr. Wataru Takei, presented a report entitled: “Experimental Project to use Sign Language in Teaching Materials ~ Accumulation of Video Teaching Materials for Japanese Language Education and Developing Teaching Materials Which Can Be Used in Self-Reliance Activity Classes”. Mr. Takei introduced the project to translate elementary school textbooks on Japanese language education for grades 1, 2, and 3 into Sign Language, and to make and promote the use of video teaching materials. Mr. Takei explained that the use of these video teaching materials yielded the following positive results: (1) they helped Deaf school children overcome their sense of weakness in studying the Japanese language, (2) they enabled the use of top-down information processing capabilities, (3) they enabled Deaf children to confirm the meaning of Japanese sentences and words in Sign Language. Mr. Takei went on to explain that in order to further enhance the positive effects of using video materials, it is necessary to develop the children’s ability to use Sign Language in the preschool stage in kindergartens. The development of preschool-level video educational materials was identified to be the next challenge.

The last report, presented by researcher Mr. Shinichiro Nakayama of the Foreign Sign Language Studies Section of JISLS, was entitled “Study on International Sign ~ Comparative Study of the Shared Interpretation of Non-manual Signals ~”. Mr. Nakayama explained that in the formation of International Sign, there is a clash of different languages and an assimilating process. His theory is that a common basis for the assimilating process is the use of non-manual signals. Mr. Nakayama explained that he showed a video clip with such expressions as “Are you going to eat?”, “I’m not going to eat”, “You’re going to eat, aren’t you?”, etc. to a total of 229 people including 7 JICA trainees from abroad, 47 Japanese Deaf persons, and hearing Japanese of 3 different levels of signing ability. As a result, the non-manual signals most correctly understood by the foreign examinees were the interrogative and negative expressions. Mr. Nakayama deduces that these 2 types of expressions are part of the common basis for the formation of International Sign.

This entry was posted in meetings and events, Japanese Deaf News. Bookmark the permalink.