The 29th Deaf Information Center in Japan Opened in Hyogo

On May 9th, “Hyogo Prefectural Center for the Deaf”, the 29th information service facility for the persons with hearing disabilities throughout Japan was opened. Roughly 1000 people gathered at the second floor of the Nada Citizens’ Center in Kobe for the opening ceremony and festivities. Many expressed high hopes in their opening remarks for this unprecedented joint project between prefecture and city.

The Center fulfills the following functions:

Kobe City provided the entire 2nd floor (total area of 960 square meters) of the Citizens’ Center and Hyogo Prefecture took on the responsibility of adjusting the facilities and providing equipments, costing a total of JPY 44,470,000 (JPY 24,470,000 for the refurbishment and JPY 20,000,000 for equipments). The government failed to give the expected assistance due to the decrease in the general revenue. At one point, it was feared that a budget cut might be necessary. However, Hyogo Prefecture offered to provide the entire sum which was to be covered by the assistance.

Boasting the largest and luminous floor space in Japan

On April 23rd, the refurbishment was completed. In the morning of the May 9th, the opening ceremony was held with 90 participants who were directly involved with the establishment of the Center, such as administrative officers, assembly members, and the representatives of the Deaf organizations.

Mr. Toshizo Ido, the Governor of Hyogo stated, “The reason why we are here today to celebrate this opening, goes back to January 17, 2003, when I paid a visit to Ms Kauppinen, former President of WFD. She advised me that a regional base for Deaf people was necessary and I became convinced of the necessity of such a specialized center.” The audience was greatly excited about this remark.

Mr. Hideo Kajimoto, Deputy Mayor of Kobe, stated that the establishment of the Center has long been an issue to be resolved in the city and said, “I hope you make good use of this Center to lead a secure and fulfilling life.”

On behalf of Hyogo Association of the Deaf, which has been consigned to operate this Center, President Kisaburo Suma expressed appreciation, saying, “It has been a long and difficult 10 years since the massive earthquake, when we were forced to face the insufficient welfare by the Prefecture, and started to seek the establishment of the Deaf information center. I am overwhelmed by today’s opening. I hope the Center will serve as an oasis where the Deaf people can gather to realize a truly rich and fulfilling life.”

In order to establish this Center, the prefectural government and the Hyogo Association of the Deaf had repeated discussions. While readjusting the existing facility, it was sought to meet the needs of the deaf people as much as possible.

The wall of the corridor next to the reception area was pulled down, making the lobby of the former public healthcare center brighter and more spacious. In the lobby, there is a room open to use by the 11 local Deaf Associations.

To become the focal point for local information centers 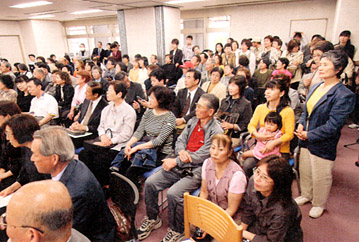 1000 people participated in the Opening Festival

In the afternoon of the 9th, roughly 1000 people gathered for the opening festival, filling up the 960 m2 floor space, which is the largest space to be renovated for specific use by the Deaf.

Newly appointed Director of the Centre, Mr. Masanori Kada (of Hyogo Association of the Deaf) expressed his determination, stating that “The facility may not be quite sufficient yet, but our enthusiasm cannot be surpassed.” Then he introduced 5 staff members and other counselors for the deaf.

After the explosive drumming performance, 12 board members went into four corners and pulled strings to open the Center, which was met with a huge applause. Then free market, dance performance, chorus and the like followed.

Director Kada reflected on the activities with the 11 Deaf Associations in Hyogo so far. He said, “I would like to further strengthen the welfare for the Deaf with close coordination and cooperation with them. Like the Awaji Deaf Center, which is operated by 3 cities and 1 town, I would like to make our Center the focal point and increase the number of local information centers in order to promote welfare for the Deaf through the provision of sign language interpretation, captioning, and other services.”