Posted on April 1, 2004 in Convention on Persons with Disabilities, Online Resources 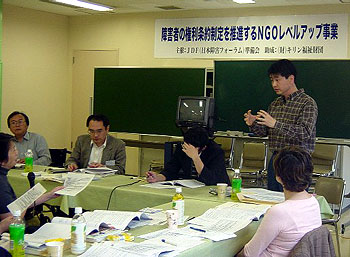 Dr. Yutaka Osugi, Executive Director of JFD Headquarters, at the recently
held strategic conference of disability NGOs, explaining the standpoint of
the World Federation of the Deaf

In Japan, disability related NGOs held a strategic conference to consider the draft convention text (organized by the Japan Disability Forum Preparation Committee) on March 27-28. At this conference, the Japanese Federation of the Deaf introduced the official WFD comments and proposals for changes.

Concerning the definition of “language”, it was suggested that WFD make use of Article 27 of the “UN International Covenant on Civil and Political Rights” (below). Concerning the right to education, it was pointed out that there should be further research on the appropriateness of classifying languages into sign language, spoken language, and written language. Prior to discussions with the Japanese government, scheduled to be held on April 28, the Japanese Federation of the Deaf will cooperate with other disability related NGOs to hold further discussions on the convention draft, especially in relation to the “definition of language”, “information/communication”, and “education”.

In those States in which ethnic, religious or linguistic minorities exist, persons belonging to such minorities shall not be denied the right, in community with the other members of their group, to enjoy their own culture, to profess and practice their own religion, or to use their own language.

Comments from the World Federation of the Deaf (WFD) concerning the Draft Convention on the Rights of People with Disabilities:

According to this article, “language” includes both oral-aural language and sign language. WFD believes that “language” should be defined (see footnote 15). WFD will propose a definition for the word “language” soon; we are currently consulting with linguistic experts.

In the view of WFD Braille and sign language should not be considered in the same light. It is very clear in linguistics that sign languages are LANGUAGES, whereas Braille is a way of writing down any language. Braille can be seen in the same way as, for instance, transcribing Kurdish written in Arabic script – as in Iraq – or Kurdish written in Cyrillic script – as in Azerbaijan – to Kurdish written in Latin script, i.e. it is a way of rendering a language in a form that group X can read. Group X can be Kurds who only know Latin script, or it can be blind people who only read Braille. Even if those Kurds can learn to read Kurdish in the Arabic or Cyrillic script whereas blind people cannot read any written language unless it is in Braille, this does not mean Braille is a language. It is a MEANS OF REPRESENTING AN EXISTING LANGUAGE. This distinction should be clear in all those articles where sign language and Braille are mentioned.

2. Draft Article 13, Freedom of Expression and Opinion, and Access to information

From the point of view of Deaf people this is a very important article, which has an effect on the texts of other articles. Official recognition of sign language should be clearly stated within the article itself.

WFD proposes that Article 13 read as follows:
States parties shall take appropriate measures to ensure that persons with disabilities can exercise their right to freedom of expression and opinion, and to seek, receive and impart information on an equal footing with others, through Braille and other modes of communication of their choice. For Deaf people, a linguistic minority, freedom of expression and opinion, and equal access to information presupposes recognition of national sign language(s) as their first language; and securing the natural language development of Deaf children in sign language. For all persons with disabilities, the measures include:

Item 4 should be rewritten. WFD proposes that item 4 be divided so that there are separate points for Deaf education in sign language; and a point of its own for Braille and education for blind people. The World Blind Union should write the point for education of blind people.

WFD would like to propose the following as the paragraph regarding education for Deaf people, to be added to Article 17:
Deaf children have the right to receive education in their own groups and to become bilingual in sign language and their national spoken and written language. They also have the right to learn additional foreign languages, both signed and spoken/written. Each state Party shall take legislative, administrative, political and other measures needed to provide quality education using sign language, by ensuring the employment of Deaf teachers and also hearing teachers who are fluent in sign language.

Support for both mother tongue medium education and bilingual teachers is in “The Hague Recommendations Regarding the Education Rights of National Minorities” from the High Commissioner on National Minorities of the Organization for Security and Cooperation in Europe (see www.osce.org/hcnm/); and also the UN Educational, Scientific and Cultural Organization’s (www.unesco.org) Education in a Multilingual World, UNESCO Education Position Paper, 2003 and Safeguarding of Endangered Languages.

Item 2 (b) mentions assistants and intermediaries. This wording will, in many ways, cause confusion and lead to a wrong interpretation of meaning and needs. Deaf people do not need a sign language interpreter “to facilitate accessibility to public buildings…” as is mentioned in item 2 (b). WFD proposes that item 2 (b) be divided into two parts, (b) 1 and (b) 2; the first to address personal assistants and the second sign language interpreting services.

The present Draft Article 2 (b) can become 2 (b) 1 with only small changes, as follows:
(b) 1: provide other forms of live assistance including guides, readers and captioning, to facilitate accessibility to public buildings, facilities and information;

Footnote 71 will then not be needed, if item 2 (b) is divided in this way.

This entry was posted in Convention on Persons with Disabilities, Online Resources. Bookmark the permalink.