Posted on November 1, 2003 in Convention on Persons with Disabilities, Online Resources

Regional Workshop towards a Comprehensive and Integral International Convention on Protection and Promotion of the Rights and Dignity of Persons with Disabilities Bangkok, Thailand, 14-17 October 2003 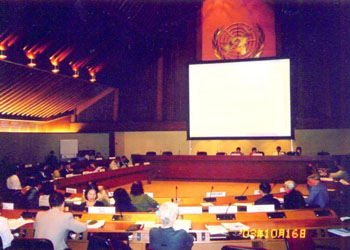 Although the meeting was called a “Workshop”, it convened for the very important purpose of drawing up and adopting a draft Convention on the Rights of Disabled Persons. The “Bangkok Draft” of the convention will be used as one of the working papers for deliberation at the next Ad Hoc Committee meeting. Only draft texts submitted by member States and Regional Commissions of the United Nations will be used as working documents of the Ad Hoc Committee. As far as I know, only the government of Mexico and UN ESCAP have submitted draft proposals of the convention so far.

The Workshop began on Oct. 14, chaired by Venus Illagan (DPI World Chair), and assisted by 5 Vice Chairpersons including myself, Eiichi Takada. At the opening of the Workshop, a statement was made by Mr. Toshihisa Takata, Permanent Representative of Japan to ESCAP (Embassy of Japan). Mr. Takata stated that the Japanese government will promote the realization of the “Biwako Millennium Framework”, and cooperate with the NGO sector to work actively toward the Convention. 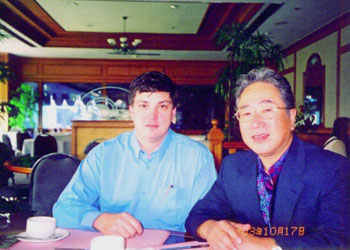 Prior to the opening of the Workshop, a discussion draft of the convention (first draft) was drawn up by Prof. Andrew Byrnes (Australian National University, Faculty of Law) and distributed to the participants. After explanations and reports, the participants divided up into 4 working groups for detailed discussions on the contents of the convention. The Japanese participants worked in the following groups: Group 1 on the Preamble, Definitions, Obligations of States was attended by Eiichi Takada, Group 2 on the Civil and Political Rights was attended by Ms. Emi Mashiko (Officer of the Foreign Policy Bureau of the Ministry of Foreign Affairs) and Mr. Toshihiro Higashi (Advisor of the Japanese Delegation), Group 3 on Economic, Social, and Cultural Rights was attended by Mr. Ryosuke Matsui (APDF) and Ms. Kazu Nakajima (Japan Council on Disability). Group 4 discussed the monitoring mechanism.

On the 4th (last) day, the discussions and conclusions from the 4 working groups were incorporated into the “Bangkok Draft” (second draft) for further deliberations in the plenary meeting. However, the inputs which Takada made in working group 1 concerning the recognition of sign languages as being equal to aural-oral languages and consequent obligations of States in ensuring the use of sign language, including the right of Deaf children to receive education in sign language were not included sufficiently in the second draft. Takada resubmitted these proposals one by one at the plenary meeting. All the proposals were adopted by the Workshop. Prof. Byrnes apologized for not reflecting the inputs fully in the second draft due to time constraints.

Although we succeeded in putting the basic needs of the Deaf into the adopted “Bangkok Draft”, the discussions were limited in time, and there is much room for further deliberation in many details. We should also keep track of other States and Regional Commissions submitting drafts of the convention.

In future, we must endeavor to make the “Bangkok Draft” known to the World Federation of the Deaf and the international society. Within our own country, we need to continue discussions to make further improvements of the draft. The Japanese government is taking an active stance toward the adoption of the Convention on the Rights of Persons with Disabilities. In order to keep up this momentum, it is important to win public support toward our goal. In Japan, we are forming a new alliance of disability organizations. One of the major objectives of this new alliance should be to start a nationwide movement toward the realization of the Convention.

This entry was posted in Convention on Persons with Disabilities, Online Resources. Bookmark the permalink.