Posted on September 1, 2003 in other, Japanese Deaf News 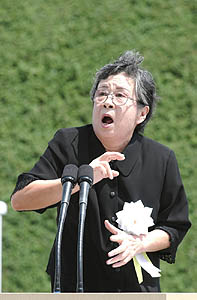 On August 9, at the 58th Peace Ceremony in Nagasaki in Memory of the Victims of the Atomic Bomb, a Deaf lady, Ms. Eiko Yamazaki, 76, represented the surviving A-bomb victims and delivered her “Peace Message” in sign language. Ms. Yamazaki used her hands and body eloquently and succeeded in conveying the full impact of her experiences and importance of her message. Her Peace Message in sign language touched the hearts of the participants and many looked on with tears in their eyes.

The appointment of a Deaf person to deliver the Peace Message on behalf of the surviving A-bomb victims was the result of persevering peace activities conducted by the Nagasaki Association of the Deaf and the Nagasaki Division of the National Study Association for Sign Language Interpretation. Such endeavors were recognized by other hibakusha groups and led to the realization of Ms. Yamazaki’s Peace Message.

“It was difficult to express my message in the limited time and to choose the sign language expressions which would best convey my message,” says Ms. Yamazaki. She had been practicing for days, but her energetic presentation didn’t show any sign of fatigue. President Kazuo Murakami of the Nagasaki Association of the Deaf commented: “It was extremely meaningful that the commitment to peace was delivered from the standpoint of the Deaf. I hope that it will help to increase public awareness on disability and lead to true peace in society.”

Construction of the Long-Desired Memorial Monument 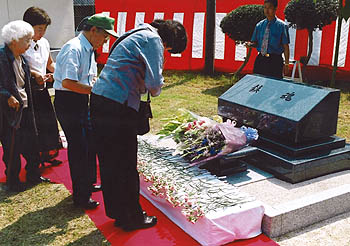 August 3 was a hot sunny day, reminding many of the same summer heat 58 years ago. On this day, the unveiling ceremony of the “Monument in Memory of the Deaf Victims of the Atomic Bomb” was held in the playground of Hiroshima Deaf School in Hiroshima Prefecture.

In his speech, President Yamamoto said, “The movement to build a Monument in memory of the Deaf who died as victims of the atomic bombing is said to have been started by 3 Deaf people just 3 years after the end of World War II. This long cherished desire has finally been realized today. I hope that this Monument will help to teach the younger generations of Deaf people about the tragic horror of the atomic bomb and the value of peace.”