We’re Not Getting Any Information! – The Plight of the Deaf During the Chuetsu Oki Earthquake 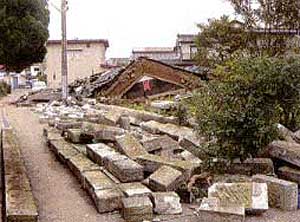 On July 16, 2007, at about 10:13 in the morning, a strong earthquake originating off the Chuetsu coast hit Niigata Prefecture on the opposite side of Japan from Tokyo. Strong quakes over the Japanese scale of 6+ were recorded in Kariu Village in Kashiwazaki City, Niigata Prefecture and in Iizunacho in Nagano Prefecture. Damages were largest around Kashiwazaki City, where many houses throughout the city collapsed. After the earthquake, major lifelines supplying electricity, gas and water were cut off, and fax and emails were not working. No casualties of the Deaf were reported in Nagano Prefecture.

Buried Underneath the Furniture

Mr. and Mrs. Kimura experienced the earthquake while at home in Kashiwazaki City. Mitsu Kimura’s legs were caught underneath the PC rack which fell on her, but narrowly escaped using her hands. Yoshifumi, her husband was totally buried under the large set of drawers and only his hands could be seen. Mitsu desperately asked for help from neighbors by using gestures and finally managed to get him out.

Several days after the earthquake, the electricity supply was restored. But what they found most worrying was the `lack of information.’ Mr. Kimura frequently visited the temporary evacuation center and collected daily supplies and newspapers, but that wasn’t enough. He requested for the prompt provision of information to Deaf people like himself, such as when food is to be distributed.

Setting Up of Headquarters 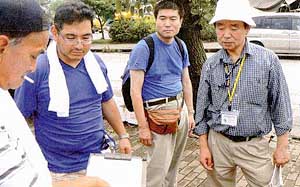 Soon after the earthquake, the Niigata Association of the Deaf summoned all its executive members. Using facsimile, SMS on mobile phones and whatever means available, they managed to confirm the safety of almost all the members on the day of the earthquake.

On July 19, six related organizations of Niigata Prefecture, with the Niigata Association of the Deaf playing the major role, got together and set up the special Headquarters to support the Deaf victims of the Niigata Chuetsu Earthquake.

But the seriousness of the injuries and the damages to the houses could not be grasped easily. Also, it was very difficult to know the whereabouts of the Deaf victims. Very little information was coming from the damaged areas due to the delay in the administrative measures.

The Headquarters dispatched 5 groups composed of executive members of the Deaf association, sign language interpreters and Deaf supporters from neighboring areas to investigate the real condition of the affected areas. With help from Deaf persons in the city, the groups visited houses of Deaf victims. They visited 26 houses to confirm whereabouts of Deaf victims and asked questions about their health condition after the earthquake as well as problems and requests.

The Headquarters will hold a report meeting on August 25 based on the result of this investigation and summarize information on the damage of Deaf victims. They will also discuss actions that still need to be taken.

This entry was posted in disaster relief, Japanese Deaf News. Bookmark the permalink.