Video Conference of the Deaf Between Japan and Uzbekistan 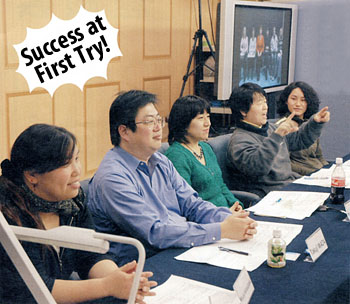 A video conference connecting Japan and Uzbekistan via ISDN line was conducted successfully and deaf participants from the two countries enjoyed discussion in sign language. The video conference was made possible by the Japan International Cooperation Agency (JICA)’s distant technical cooperation project (JICA-Net). The conference was held on the evening of Dec.9, 2005 at JICA Tokyo International Center with 5 participants from each country.

Director Takeo Ogura of WFD Regional Secretariat in Asia/Pacific (RSA/P) facilitated the video conference. Mr. Yasushi Inaba, the Director of the Uzbek-Japanese Human Resource Development Center, gave an opening speech in which he said, “We offer a computer course for the Deaf at the Uzbek-Japanese Human Resource Development Center. The students have been requesting an opportunity to exchange opinions with Japanese Deaf people. I am glad that we could finally make it happen with the video conferencing system.” Participants at both venues welcomed the speech by waving their hands at the same time on the screen.

Discussions were started with self-introductions of participants interpreted into International Sign. During Sign Quiz time, the Japanese participants showed the signs for “sushi”, “cotton”, “cat”, and the Uzbekistan participants showed their signs for “helicopter”, “sea”, “socks”. In guessing what these signs meant, some really funny answers filled both venues with laughter. Some were too hard and had to be given up. 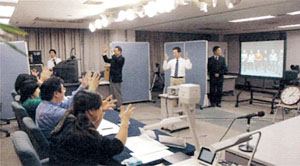 International sign interpreters (center) stand between
the participants and the screen to interpret. 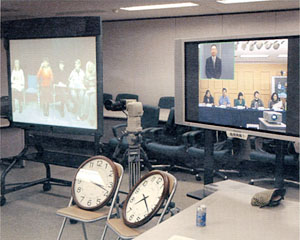 Through this first attempt, some technical problems became evident, such as the slow speed of sign language movements on the screen, and the difficulty of operating the video cameras smoothly. On the whole, however, the conference was a success considering that it was a first attempt. We can look forward to further developments and improvements in the future.

Uzbekistan is a distant country. It takes about 9 hours by plane from Japan. The technology of video conferencing will enable us to conduct simple talks without flying their each time. We can look forward to the application of this technology for efficiency in communication.