Reconfirming the Significance of an International Convention on Disability

Posted on September 1, 2004 in Convention on Persons with Disabilities, Japanese Deaf News

International Seminar on the Convention Held in Kyoto 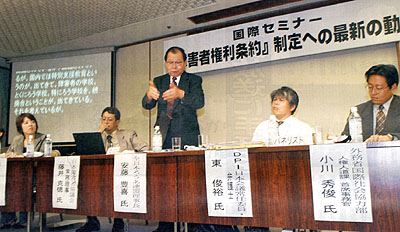 Pres. Toyoki Ando of JFD (standing in center), presenting his views from the panel.

The International Seminar on Recent Movements Toward the “Convention on the Rights of Persons with Disabilities” was held on August 9th at the National Center of Sign Language Education in Kyoto City, hosted by the Japanese Society for Rehabilitation of Persons With Disabilities (JSRDP), with cooperation from the Japan Disability Forum (JDF) Preparation Committee. Discussions at this Seminar were focused on such issues as the definition of “disability”, and the understanding of “reasonable accommodations” by which persons with disabilities can achieve equality.

Representatives of the Japan Disability Forum (JDF) Preparation Committee confirmed the need for action based on sound principles in order to attain a convention of high quality in as short a time as possible. To achieve this purpose, it was agreed the Japan Disability Forum, which is still in its preparatory stage, would be formally established in autumn. JDF will aim to develop its advocacy movements and endeavor to win nationwide support toward the convention. 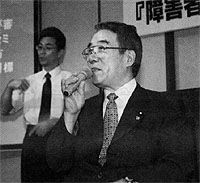 Diet member, Mr. Eita Yashiro stated that
“the voices of persons with disabilities is
essential in drafting the convention”

A speaker at the Seminar, Mr. Eita Yashiro, a member of the House of Representatives, reported that some governments are trying to exclude NGOs from the formal UN conferences on the convention. Mr. Yashiro stated that he would be participating in the Fourth Session of the UN Ad Hoc Committee as an observer. “I will take every opportunity to persuade different governments to listen to the voices of persons with disabilities themselves.” Mr. Yashiro also reported that there is a movement among the members of the Diet to organize a group within the Diet aimed to support the establishment of the convention.

Toward the Establishment of An Anti-Discrimination Law

Board Member Eiichi Takada
of JFD, welcoming
participants to the first
seminar on the convention
held in Western Japan

Deputy Director Ogawa explained the situation surrounding the convention. He pointed out that governments have different views on the definition of “disability”. He noted that a big issue is the introduction of the concept of reasonable accommodation into a legal document.

Professor Yamazaki spoke on the international human rights system. He explained that in the case of other human rights conventions, governments first accepted a less-binding “declaration”, and later went on to adopt a convention. He stressed the need for a convention which would lead to the enactment of a domestic anti-discrimination law, and the need for a monitoring system independent of government intervention.

Ms. Nagata gave a speech on the main points that need to be considered. She especially stressed the importance of obligatory legal remedies. She also referred to the Anti-Discrimination Law enacted in Hong Kong in 1996,and pointed out the need to look at good examples set by other countries.

Need to Push Our Movement Further

In the afternoon, a panel discussion entitled, “Strategic Issues Toward the Realization of the Convention and Our Country’s Role”, featured 4 panelists, including President Toyoki Ando of the Japanese Federation of the Deaf, and Director Katsunori Fujii of the Japan Council on Disability. Besides the 4 members of the panel, further insights were offered by the 2 information presenters, and 4 designated speakers.

President Ando commented, “If organizations of persons with disabilities can push harder in advocating for our standpoint on the definition of disability and other issues, we may be able to yield results which would be a model for other Asian countries.” He went on to say that, “We should not wait for the convention to be ratified, but should speed up our endeavors to realize the enactment of a domestic anti-discrimination law. Such endeavors within our country will lead to the drafting of a good convention.” Pres. Ando also stressed that the entire population needs to have a stronger awareness about human rights. He said, “If welfare for persons with disabilities comes to be understood as being based on human rights, it will lead to the improvement of social welfare for the population at large.”

Mr. Fujii spoke about the merits of an international convention and explained, “If we have a common language (on disability) and clarify international concepts and standards, it will help to promote human rights in the developing countries.” He also requested that the government should actively establish a new structure to handle the convention, cross-cutting the boundary between ministries. 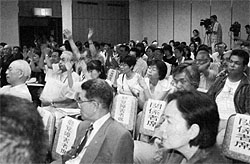 Active participation from the floor

Besides such comments from the panel, other inputs and questions came from the designated speakers and from the floor: “The exemption provisions concerning discrimination found in the draft convention weaken the upholding of rights.” “There is no system (in the draft convention) for a third-party inspection of the validity of a psychological medical diagnosis.” “Is it an infringement of human rights to have an abortion if it is found that the unborn baby has a disability?” “Isn’t it wrong to restrict the legal rights of persons with mental disabilities, such as denying the right to sign contracts, on the assumption that the person does not have the ability to make the decision?” “Is it an infringement of rights if a company refuses to employ a Deaf person because it cannot provide sign language interpretation in the workplace?”

In reply to such issues raised from the floor, one of the panelists, Mr. Toshihiro Higashi, a lawyer, commented: “It is important for each of us to reexamine our experiences and develop an awareness of human rights. It is important to spread the movement, each in his community, and eventually develop it into a big movement in which everyone can participate. “