A Bolt From the Blue – Unexpected heavy downpour ravaged 28 families of the Deaf in 3 prefectures of Niigata, Fukushima and Fukui

Mobile phones prove to be most useful, and fax machines less so

A torrential rainfall caused by the active seasonal rain front ravaged three prefectures of Niigata, Fukushima and Fukui. As of July 26, it is confirmed that there were no injuries to any Deaf people or to sign interpreters. 28 families of the Deaf in Niigata and Fukushima, were however, reported to be flooded above or below floor level.

Spending a night on top of a car roof 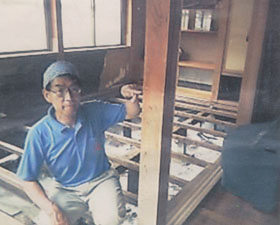 Home of Mr Katsuya Haga, chairman of Sanjo
Deaf Welfare Society in Niigata. The flood
water reached the level where he is pointing at.

In Niigata Prefecture, damages concentrated in the cities of Sanjo and Mitsuke, and the town of Nakanoshima. Casualties among the Deaf were 16 floodings above floor level and 2 below. Many Deaf people live in Sanjo City. Every road there was covered with water up to knee or to chest level and roads leading to Sanjo were so congested that it was difficult to reach the devastated area. In such circumstances, leaders of the local sign language study group took the initiative in confirming the safety of the Deaf in the community.

Many facsimile machines went underwater and became useless, while sending and receiving text messages through mobile phones proved most useful in confirming safety and exchanging information. On the other hand, people without mobile phones spent worrisome days, not having means to communicate with others.

The first floor of the home of Mr Katsuya Haga, chairman of Sanjo Deaf Welfare Society, was flooded. A new facsimile machine was brought to his home by the Niigata Deaf Association. A deaf person who spent a night on the roof of his car submerged underwater said, “My wet body became cold and it was scary because it was so dark around.”

Help extended to the Deaf in Fukui 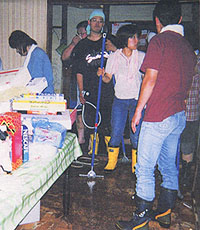 In Fukui Prefecture, Deaf people and sign
language interpreters in the area got together
to help clean up the homes of the victims.

Also in Fukui Prefecture, homes of the Deaf were flooded, 5 above floor level and 3 below. On July 18, when the evacuation advisory was issued, officials of the Fukui Prefecture Deaf Association informed the members in the affected areas to evacuate to nearby schools or community centers by text messages sent via fax or mobile phones. Some Deaf people evacuated with the help of sign interpreters in the area. At the evacuation centers, sign interpreters were made available arranged by the prefectural authority.

By the morning of the 19th, people at the evacuation centers went back home and by the evening, everyone’s safety was confirmed. Deaf people and interpreters in the area went to help the cleaning-up of the houses and successfully managed to put things in order.

Deaf Associations of the both prefectures are now collecting funds to repair the damaged houses. They also intend to take measures for making counter disaster manuals for the Deaf and also to ensure sign language interpreting in disaster recovery measures including application procedure for such measures.

Japan Organization of CS Broadcasting for People With Disabilities broadcast 3 emergency reports regarding the situation of the water disaster. The Japanese Federation of the Deaf decided in its recent board meeting that Mr. Toshisaburo Ishino, General Secretary of JFD would act as the responsible official at the time of disasters and emergency including the current water disaster.

What happened to the Deaf in Niigata and Fukui when Flood Hazard hit?

Was there any lesson learned from the Hanshin-Awaji Earthquake of 9 years ago? This is how deaf people survived the concentrated downpour at evacuation centers and dealt with other difficulties.

Situation at the Evacuation Centers in Niigata 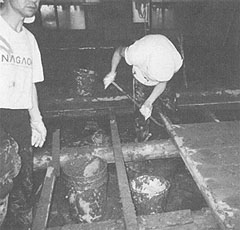 Basically people evacuated to the nearest centers, but as the center became overcrowded people needed to move to the next center. One Deaf person finally settled at the third center having been moved from the second, but since his name was not on the list of evacuees, he was considered missing. In the end, a regional supporter managed to find him.

Television and text massages at the evacuation centers were not effective because of the prolonged electric power failure. Renewed evacuation orders were issued due to the continued heavy downpour but it became increasingly difficult to get the latest information. In those situations, many Deaf people followed news broadcast with subtitles and some received information through captions superimposed to ordinary news programs. Some of the Deaf in the evacuation centers finally learned that the water had receded a day after the hearing people got the news.

Though electricity, gas and water supplies were restored, some had to stay overnight at the disaster center because of the damages to the home appliances. Some people managed to go back home. Some hearing impaired person fell ill due to exhaustion and was taken to the hospital by ambulance. 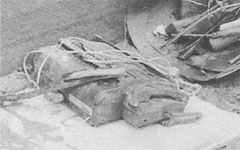 Members of the Deaf Association and of the sign language study groups got together and helped to clean mud from the houses. Inside houses, mud covered tatami mats and wooden floors were all taken away and now people are waiting for the under floor to dry. Then new wooden floor and tatami mats will be put in.

After the Hanshin-Awaji Earthquake, counter disaster measures were drawn up by local governments. Prefectural Deaf Association, along with related organizations, is making appeals to local administrative officers in their campaign visits. The fact that the evacuation notification was only announced through loud speakers on public information announcement cars, and that those announcements and sirens were not received clearly even by the hearing people because of the heavy rain and wind, suggests a necessity to make a fundamental review of the counter disaster systems.

There are Deaf people who are worried whether they can retain their jobs after the disaster, though the flooded company has announced plans to reopen and start operation.

As for the interpreter referral service in Sanjo City, where the damage is the heaviest, there are only 5 or 6 interpreters who can work during the day. Negotiations are now being conducted to consider dispatching interpreters from Niigata Prefecture.

In Fukui Prefecture, as well, there were some evacuation centers where there were no sign interpreters. Local people helped the Deaf evacuees by communicating with gestures and/or in writing, thus offering information. In cities like Fukui and Sabae, registered interpreters visited the Deaf who might have suffered some damage or injury. By the morning of July 19, all the deaf people who were in the evacuation centers went home and by the evening, everyone’s safety was confirmed.

This entry was posted in disaster relief, Japanese Deaf News. Bookmark the permalink.