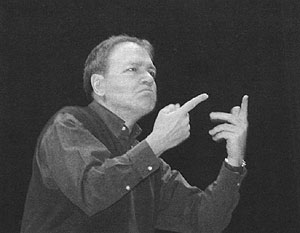 International Sign interpreter Bill Moody gave lectures at a meeting organized by the International Committee of the Japanese Federation of the Deaf on February 7th and also at the 4th Sigh Language Research Seminar held by the Japan Institute for Sign Language Studies (JSLS) on the 8th.

Both lectures took place in Creo Osaka East in Osaka City and each was attended by roughly 90 people including the members of JSLS.

Moody talked about the activities in the late 1970’s France to promote awareness on Sign Language and about the contents of ASL interpreter training courses in the US.

He revealed that at last year’s World Congress of the World Federation of the Deaf, there was a heated discussion over “whether International Sign is a language or not” and the topic was decided to be carried over to the next meeting in four years’ time. He asked attendants’ opinions on that issue.