Posted on July 1, 2003 in Convention on Persons with Disabilities, Japanese Deaf News 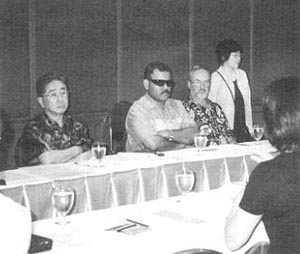 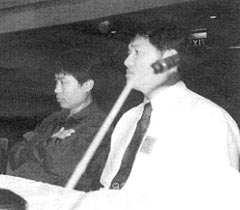 The United Nations Economic and Social Commission for Asia and the Pacific (UNESCAP) hosted the “Expert Group Meeting and Seminar on an International Convention to Protect and Promote the Rights and Dignity of Persons with Disabilities” from June 2-4, 2003 at the UNESCAP Conference Center in Bangkok, Thailand. Eiichi Takada of Japan attended the meeting in his position as Board Member of the World Federation of the Deaf (WFD).

The meeting opened with an address by Mr. Kim Hak-Su, Executive Secretary of UNESCAP and the presentation of a message sent by Ambassador Luis Gallegos of Ecuador, who is the Chairman of the UN Ad Hoc Committee on the International Convention on the Rights of Persons with Disabilities.

The conference was attended by about 130 people, including representatives of SHO of persons with disabilities, governments, UN agencies, related bodies, and resource persons. Among the attendees were Mr. Abdullah Wardak, Minister of Martyrs and Disabled of Afghanistan, Mr. Andrew Byrnes, Professor of the Faculty of Law of the Australian National University, Mr. Clinton Edward Rapley, and others. Discussions and presentations centered on the contents of the proposed International Convention on the Rights of Persons with Disabilities. On the last day, the conference adopted the “Bangkok Recommendations on the Elaboration of a Comprehensive and Integral International Convention to Promote and Protect the Rights of Persons with Disabilities”. The conference itself and the Bangkok Recommendations reveal that UNESCAP is strongly committed to the realization of the convention.

The 6th Session of the TWGDC, which is part of the UNESCAP Regional Coordination Mechanism, was held on June 5-6, 2003 at the UNESCAP Conference Center in Bangkok, Thailand. The conference was attended by 50 persons, including government representatives from Japan, Thailand, and other countries, representatives of related UN agencies and bodies, disability NGOs, etc. Eiichi Takada represented the World Federation of the Deaf.

On the second day, the conference (1) adopted the Terms of Reference for the TWGDC for 2003 to 2004, (2) adopted the “Evaluation of the Role of the United Nations Economic and Social Commission for Asia and the Pacific in the Implementation of the Agenda for Action for the Asian and Pacific Decade of Disabled Persons, 1993-2002, and in the Achievements of the Decade”, (3) decided to focus on the promotion of the “Biwako Millennium Framework for Action” of the “Second Asian and Pacific Decade of Disabled Persons, 2003-2012”, (4) decided to support persons with disabilities in Afghanistan and Timor Leste, (5) decided to promote the drafting of the “Comprehensive and Integral International Convention to Promote and Protect the Rights and Dignity of Persons with Disabilities”.

Support Toward Afghanistan and Timor Leste

Afghanistan is beginning to rebuild the country. The Afghanistan National Association of the Deaf is already enrolled as a member of WFD. The members of this association desired to attend the World Congress of the World Federation of the Deaf and requested assistance from the WFD General Secretariat, but were unable to get a response. Board Member Eiichi Takada of WFD received a formal letter from Minister Wardak of the Afghanistan Ministry of Martyrs and Disabled, requesting WFD’s support for the Deaf in Afghanistan. Board Member Takada promised to contact Director Takeo Ogura, of WFD Regional Secretariat in Asia/Pacific promptly.

Government and NGO representatives of Timor Leste also approached Mr. Takada for assistance toward the Deaf in their country. Mr. Takada explained the importance of establishing a nationwide organization of the Deaf, which would be qualified to become a member of the World Federation of the Deaf. Mr. Takada promised to keep in contact with Timor Leste.